This is an interesting point of discussion.  In a crossbreeding situation is it better to use a bull that was born ten years ago and has 20’000 daughters milking or one that would appear ‘new’? There are bulls on offer in North America that were derived from german embryos placed in North American cows.  Out of proven ET dam and sire in Germany – likely ‘older’ genetics.  Then mated to a higher proof bull.  Raised up, collected and resold as a ‘new’ young sire.  These genetics of course are much more affordably priced than the older high proof genetics that we have promoted for years….. 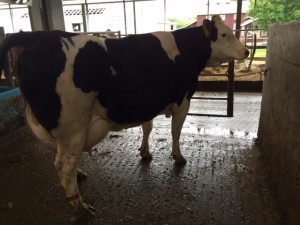 If a farm averages 2.5 inseminations for a pregnancy the increased cost of a pregnancy is $25 to $30 for each animal conceived and entering the milking string.  There is no question that this cost adds up.

Here is a different question:  What is the saving then if the cow from the young sire lasts 0.5 lactations shorter than the one from the proven bull?  Is money saved up front really money lost in the long run?

Nice thing about a young unproven sire….takes three years for the farmer to know what he will get.  So by that time….the AI company is on to the ‘next’ one.  The ‘next’ one that promises to be better than the ‘first’ one.   The ‘other’ one that is better.

Daughter from Don Juan – used a lot for crossbreeding. Although after a long proof period his feet and leg composite fell his results still acceptable

We have learned over the years, that even with proven sires in crossbreeding – some will give above average results – others below average results.  The complete ‘failures’ or relatively minimal though.

We have produced and sold many jumper bulls from similar genetics that are available for AI by our competitors in the United States.  I get nervous always when the farmer purchases only one ‘jumper’ bull.  No matter how good the pedigree it can still just simply fail and the results are poor.  Of course with a greater variety of bulls the risk is not as high.

If you are using Fleckvieh for the first time and you honestly want to give the breed a chance on your farm….try a couple of proven bulls and better less of those for more money than the next ‘young’ champion. It is your livelyhood. 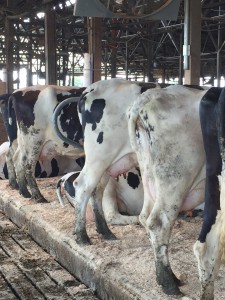